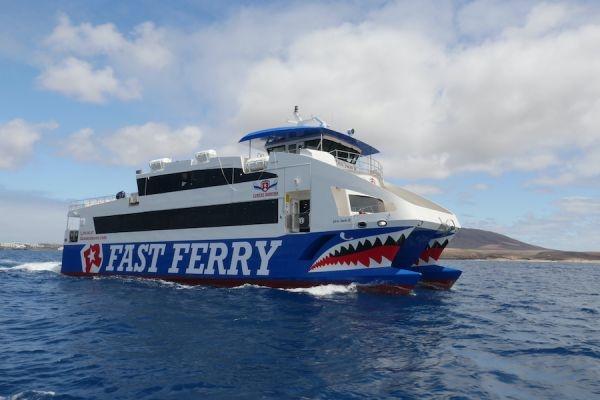 The Lanzarote to Fuerteventura Ferry

Are there things to do in Fuerteventura?

Although Fuerteventura is another volcanic island it's very different to Lanzarote. The streets are lined with coloured buildings and there is a different feel to the place. It is also home to the famous Fuerteventura sand dunes which are just a short ride (or long walk) from the port town of Corralejo. As you venture further south you'll come across amazing volcanic landscapes that have been claimed by sweeping sands. The golden beaches of Jandia are some of the best in the world and a popular kite surfing destination. Not far from here you'll also find the Oasis Park Zoo which is a fantastic day out for all the family.

Catching the ferry from Lanzarote to Fuerteventura

The ferry services from Lanzarote of Fuerteventura all depart from the port in Playa Blanca. There are three ferries in total that go from Lanzarote to Fuerteventura and your choice of service depends on if you have a car, or you're on foot, and how quickly you want to get over to the neighbouring island. Although the trip only usually lasts 30 minutes, all boats have refreshments onboard to enjoy during the crossing. And of course you can sit out on deck and enjoy the views of both Lanzarote, Fuerteventura and the island of Los Lobos.

The best way to get from Lanzarote to Fuerteventura is by ferry from Playa Blanca. If you want to explore the neighbouring island you should take one of the two larger ferries which can accommodate your car. It is also possible to hire a car once you've made the crossing and the taxi service covers the entire island. You can arrange to take the ferry yourself, or you can book it as part of an excursion to Fuerteventura. The most popular excursion to Fuerteventura is the sand dunes which are just by the town of Corralejo on the north coast. The tour is fully guided and there is a collection and drop off at all the major hotels in Lanzarote.

Corralejo is a small, but busy, town on the North coast of Fuerteventura which amazing views over the islands of Los Lobos and Lanzarote. It's popular with water sports enthusiasts, has many boat trip excursions and vibrant bars and restaurants lining the walkway on the waters edge. The town itself it a little more built up than Playa Blanca and has an excellent night scene popular with young music lovers. If you're Vegan or Vegetarian then Corralejo is a great place for you, as you'll find many dedicated restaurants lining the small streets just off the promenade. There is also a water park in Corralejo, which is bigger than the three you will find in Lanzarote.

You might be staying in Lanzarote, but we highly recommend the Fuerteventura Jeep Safari excursion. The 4 x 4 jeep off road experience is so much fun and you get to visit parts of Fuerteventura you would never see by road. With Ferry crossing included and lunch, this is a great way to see two islands in one holiday.

Is it true there are wild Chipmunks in Fuerteventura?

Yes! Fuerteventura has wild chipmunks or squirrels that inhabit the coastline and higher regions. Whilst they tend to live in the slightly more remote places, it's possible to see them, and even feed them by hand, in parts of Corralejo near to the El Compasino shopping centre.

If you want to see a bit more of Fuerteventura then the tour is a great way to do just that. With stops at 8 different locations, you can experience the Fuerteventura Aloe Vera Plantation, the Holy mountain of Tindaya, Goat cheese production and tasting, the beautiful village of Betancuria (the old capital of Fuerteventura), Pass the village of Pajara and Antigua, the Valley of Saing Angnes, stop off for lunch and of course, a Fuerteventura Excursion wouldn't be a Fuerteventura excursion with a stop at the famous Sand dunes

How can you book the ferry from Lanzarote to Fuerteventura

Book your Lanzarote Flexi ticket here and go on whatever time ferry to Fuerteventura you want to any day.

Whatever resort you are in you can get the Ferry from Lanzarote to Fuerteventura with completely FREE BUS pick up departing at 9:30 am and returning at the 17:30 pm on set days of the week. This gives you plenty of time to explore Corralejo and the sand dunes, do a spot of shopping and enjoy a relaxing lunch before returning to Lanzarote.

Whatever way you decide to go from Lanzarote to Fuerteventura we make it really easy for you and save you time and money. So book today.